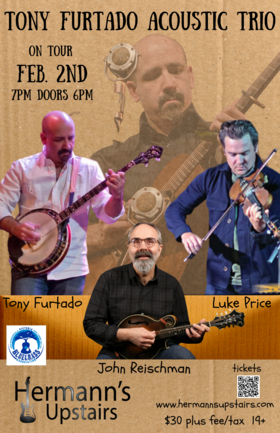 Thu. February 2nd 7:00 - 9:30 doors at 6:00 (No Minors)
$30 plus fees/tax, walk-ins welcome  Buy Tickets Online
>> Purchase In-Person Tickets
Tony Furtado is an evocative and soulful singer, a wide-ranging songwriter and a virtuoso multi-instrumentalist adept on banjo, cello-banjo, slide guitar and baritone ukulele who mixes and matches sounds and styles with the ﬂair of a master chef (he’s also an accomplished sculptor, but that’s another story). All of the music of America is in Tony’s music. Relix hit the nail on the head when writing of Tony: “True talent doesn’t need categories.”

“Tony Furtado, banjo player, is back…in a big way,” writes banjo master Tony Trischka in his liner notes to Decembering, the brand-new album from Tony Furtado. “He’s planted his flag in the midst of the fertile ground that is modern banjo. Texturally fresh, confidently audacious, rich and giving, this recording is a masterpiece.” Decembering is a welcome return to the banjo and a much-needed ray of sunshine and light in these troubled times.

Tony has performed throughout the world at top venues and appeared at such prestigious music festivals as the Telluride Bluegrass Festival, High Sierra Music Festival, Jazz Aspen, Kerrville Folk Festival, Strawberry Music Festival, Winnipeg Folk Festival, Sisters Folk Festival, San Jose Jazz Festival and countless others. He especially values the opportunities he has had to tour with such legendary musicians as Gregg Allman and with such esteemed slide guitarists as David Lindley, Derek Trucks and Sonny Landreth.

John Reischman
Grammy Award-winning musician John Reischman has been a foundational mandolinist, composer, bandleader, and musical educator in bluegrass and North American roots and folk music since emerging from the vibrant “new acoustic” bluegrass music scene of the Bay Area in the 1980s. A member of the groundbreaking Tony Rice Unit, Reischman’s mastery of bluegrass, old-time, swing, and multiple Latin American musical styles, coupled with an Old Master’s sense of tone, taste, and musicality, has brought him a global reputation as one of the finest mandolinists of his era.

Luke Price
Four-time (and current) Grand National Fiddle Champion Luke Price is a multi-instrumentalist performer, composer, and studio musician based in Portland, OR. He has his roots in American fiddling and swing traditions, but his interests and influences are diverse ranging through Soul, Jazz, Pop, and Americana. Luke regularly plays and sings in vintage soul/pop tinged band, “Love, Dean” alongside his wife Rachael Price. Luke brings a unique voice to any music he plays, whether he’s on the fiddle, electric guitar, or singing.
© 2023 Arts On View Society