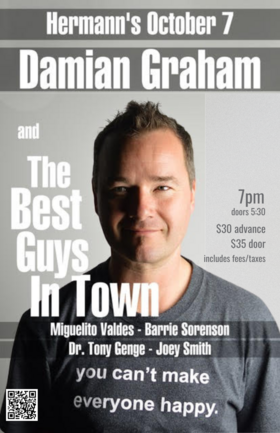 Damian Graham and the Best Guys In Town

“When I first booked this group I didn’t have a name but I looked at the folks in the band and thought 'how lucky I am to be playing with the best guys in town". And then it hit me. I should call this group the Southern Express Train To Awesome Town…. But my wife had a better idea so I went with that.”

Hi my name is Damian Graham and I write band bio’s and give narration where none is needed. If you are reading this you have no idea who I am or what I do. Or, if you do know who I am, you are reading this wondering what I am up too with this group? Either way for this performance I will be hitting stuff and chatting between songs. We will do a lot of horn laden funk tunes and some really swinging stuff too…. Oh and lots of Wah Wah pedal courtesy of Joey Smith!!

Miguelito Valdes is one of the greatest musicians and an all round “cool dude”. When he plays angels fly out of his horn. Not literally. But I’m just saying he is that good. And if Walt Disney animated him playing that is what you would see. Barrie Sorensen is a killer sax player and he is guaranteed to enter “Beast Mode” at least twice a set. Joey Smith is the busiest musician on the West Coast, cause he is an amazing player and easily the nicest person you will ever meet. He will play his 1958 Gibson through a Wah Wah pedal, into his Fender Princeton Reverb amp and the tone will make you forget all your worries! On organ we have the incredible Dr. Tony Genge. I have to state that he is a doctor of music only, don’t go trying to show him something you are “wondering about” on the set breaks. That’s a funny joke mostly because it happens all the time……

We sure hope you can make it down and share some good times with us!
© 2022 Arts On View Society