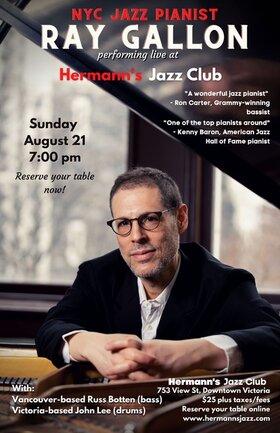 Sun. August 21st 7:00 - 9:00 doors at 5:30 (All Ages)
Livestream + In Person $25  Buy Tickets Online
>> Purchase In-Person Tickets
>> Donate to Support the livestream
A NYC-native, pianist Ray Gallon has been a mainstay on the jazz scene for over thirty years. Rooted in bebop and blues, his expressive, swinging playing melds old and new into a fresh, original style. As a young player, Ray was mentored by legendary jazz pianists John Lewis, Hank Jones, and Jaki Byard. He has toured and/or recorded with such luminaries as Ron Carter, Lionel Hampton, Art Farmer, George Adams, Les Paul, and Wycliffe Gordon and has appeared at the White House and Kennedy Center with jazz legends Dizzy Gillespie, Milt Jackson, Sweets Edison, and Joe Williams. Ray has also accompanied many vocal greats, including Jon Hendricks, Sheila Jordan, and Chaka Khan. Involved in education, he is currently a Lecturer of Jazz Studies at City College of NY. Ray’s acclaimed trio album Make Your Move (Cellar) features David Wong and Kenny Washington and look for his upcoming trio release with non-other than Ron Carter and Lewis Nash.

Bassist Russ Botten learned his craft from artists including Don Thompson, Ray Brown and John Clayton. He has toured with Diana Krall, Renee Rosnes, Clark Terry, Ernestine Andersen, and many others.

Drummer/multi-instrumentalist John Lee graduated from Berklee College of Music in Boston in 2016 and has gone on to establishing himself as a prominent jazz musician first in Victoria and Canada. His debut release as a leader on Cellar Records is enjoying a place on top Spotify playlists, and garnering rave reviews.

A Victoria BC native, played sax, guitar and keyboard in many different musical settings before settling exclusively with the bass. In 1983 he attended The Banff School of Fine Arts to study with Dave Holland and Don Thompson. He also studied in the US with Ray Brown, Gary Peacock and John Clayton. Since his move to Vancouver in 1990, he toured... more info
Videos: