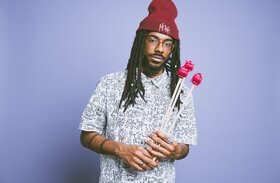 Tue. June 28th 2022 9:30 doors at 8:00 (No Minors)
$30.04
Brooklyn-based composer and rising star Joel Ross is the most thrilling new vibraphonist in America. Ross is basically a living blur of mallets, talent, and ideas. In 2019, he joined the Blue Note Records roster, adding his name to an illustrious jazz vibraphone legacy on the label that extends from Milt Jackson and Bobby Hutcherson to Stefon Harris. In 2019, Ross released his debut on Blue Note, KingMaker, with the five-piece band he calls Good Vibes. Now, Ross has topped the DownBeat Critics Poll Rising Star category for vibraphone — graduating beyond the Rising Star to well-honed artist in 2021 after releasing his 2020 album, Who Are You?. The Parable of the Poet, Ross’ third album for Blue Note Records is set to release in spring 2022.
“Particularly on his own compositions, Mr. Ross and the band treat rhythm as both fundamental and unfixed, while dousing the music in harmonies derived from modern gospel.” — The New York Times
© 2022 Arts On View Society