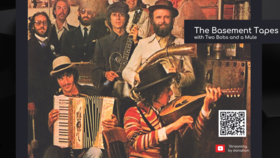 Two Bobs And A Mule play The Basement Tapes!

Fri. October 29th 2021 19:00 - 21:00 doors at 17:30 (All Ages)
Livestream + In Person $25
Sorry, this event is now sold out
>> Donate to Support the livestream
Bob Dylan and The Band casually recorded a staggering collection of new Dylan songs together in a New York State basement in 1967. In 1975, some of these weird and wonderful tunes, plus a few demos from The Band, were released as The Basement Tapes. These unpolished and sometimes unfinished songs are among our very favourites, and we're thrilled to be playing most of the album!

marc jenkins (a self-styled guitar guy of many hats...)